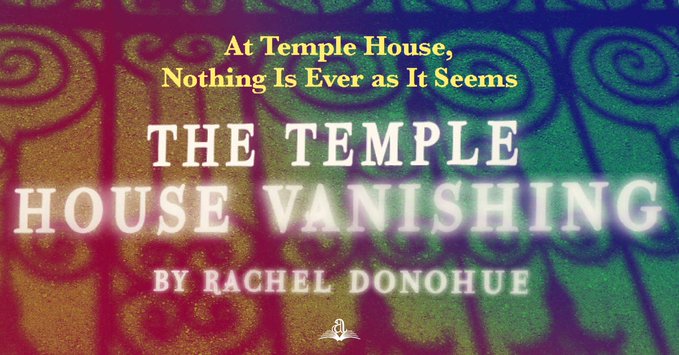 The year is 1990, and Louisa is the brilliant new scholarship student at the all-girls Catholic boarding school Temple House. Immediately shunned by the rich and popular students, Louisa forms a fierce bond with the compelling Victoria, an outlier and student provocateur. But the girls’ friendship is soon unsettled by the young, charming art teacher Mr. Lavelle, whose lingering presence around his students ignites rumors and tension within the school’s sheltered campus. Then, suddenly, Louisa and Mr. Lavelle disappear. Many years later, the case remains open, and it has become the unsolved mystery that fascinates the media. On the twenty-fifth anniversary of Louisa and Mr. Lavelle’s disappearance, a journalist tries to finally uncover the truth, and she is quickly drawn into a web of lies and long-buried secrets. What really happened at Temple House all those years ago?

There are two types of girls who go to Temple House. The legacies who come from prominent families and the scholarship students whose talents shine bright enough to get them noticed. Victoria is part of a long line of women who have attended the school. When Louisa arrives she is drawn not just to this charismatic teacher that a lot of the girls have a crush on but also to Victoria. She revels in being noticed by her, being chosen to take part in Victoria and Mr. Lavelle’s excursions.

When both Louisa and Mr. Lavelle disappear at the same time rumour has it that they have run off together. But Temple House is closed mouthed and its familes and have circled their wagons. It is now 25 years later and a journalist who grew up in the shadow of Louisa’s disappearance has decided to dig for clues into this life-long mystery. She visits the school, talks to former students and staff as well as the police who investigated the case. She scours the internet for clues and direction. A new picture starts taking shape. The vision of Mr. Lavelle as a charming fellow who could break anyone out of their shell starts to fade as people who knew him describe a man with a darker side with many secrets to hide. Was he capable of harming Louisa? Is it possible that both he and Louisa are dead? Did Victoria or oneof the other girls act out in a fit of jealousy? To what extent is Temple House complicit?

The Temple House Vanishing is written in dual timelines. The present is narrated by the journalist and the past by Louisa. I found the journalist chapters more intriguing as they dealt directly with unravelling the mystery. Overall the book is well written, but the pacing was very slow. I can see the parallels between this book and Kate Elizabeth Russell’s My Dark Vanessa. Atmospheric and brooding, I would recommend this book to people who like gothic novels.

Hailed as “a rising star” (RTE Guide), an “enchanting writer” (The Sunday Business Post), and “a writer to watch” (The Canberra Times), Rachel Donohue was born and raised in Dublin, where she won the 2017 Hennessey New Irish Writer of the Year Award for Short Fiction and was a finalist for the 2020 Irish Book Awards’ Newcomer of the Year.